So recently, I went dumpster diving. Ok, so maybe not exactly dumpster diving in the literal sense, but it was someone’s trash. There have been a few times in the past that I’ve come across something someone was throwing away and kept it for personal use, like the time someone threw away a TV that worked just fine, but this is the first time I’ve been dumpster diving for profit. And a pretty decent profit at that.

For those of you who don’t know, we are currently in Fort Lauderdale, which has so many good things about it. Amazing beaches, the absolute best weather in the winter months, and no shortage of killer restaurants.

It also has no shortage of terrible drivers, people who are truly bat-shit crazy, and obscene wealth.

So one day, my guy and I are in the car headed to the grocery store. We are docked just off of Las Olas, which is sort of the Rodeo Drive of Fort Lauderdale. Lots of expensive boutiques, art galleries, and cars that cost more than your house. You get the idea.

As we are nearing the end of our street, we see a pile of stuff on the side of the road by the trash cans outside this one house. We got closer and I realized they were golf clubs. Now I don’t know a thing about golf except how to drive the beer cart, but what I do know is that golf clubs are expensive.

“Honey, pull over and stop the car!” I demanded.

“What are you going to do with golf clubs? You don’t even play golf, and we have no room on the boat for these!”

I looked at him like he had two heads.

As we got out of the car, we saw that the guy who lived in the house was in his driveway washing his car. Chris whispered, “he probably just has them sitting there while he cleans his car and then he’s going to load them back in.”

“Sir – excuse me, sir? Are you throwing these away?”

“Yeah – take whatever you want.”

Chris couldn’t believe it. As we walk over to the pile of clubs, we realized that there were about 60 of them. That’s right. Dude was throwing away about 60 golf clubs! Even more exciting was that many of them looked brand new. Now, like I said, I know nothing about golf or golf clubs, but Chris does, so he said to grab the drivers and the ones with headcovers on them first.

We grabbed a few and threw them in the trunk. Went back and then started looking for the ones that looked new. After grabbing a total of 15, my honey said it was time to go.

He then said something about how I tend to procrastinate, and that he bets that 6 months from now, these clubs will still either be in the car or on the boat. He drew the line at what we had.

Right about then, someone else pulled up and started walking towards the pile. I wanted to tell them to get their dirty paws off my clubs, but Chris told me not to be greedy and to let someone else have some fun, too.

Me? Greedy? That person was gonna walk away with 50 clubs and we had 15. That’s not me being greedy, that’s me being stupid for letting them get away!

After my inner tantrum subsided, I agreed that he was right. We didn’t even know if these were worth anything, so let’s just be happy with what we got, because even if we just sell them all for a hundred bucks, that would be like finding a big fat Benjamin on the ground, and who wouldn’t be ecstatic about that?

One Man’s Trash is Another Man’s Honeymoon Fund

One thing that my honey is totally right about is my tendency to procrastinate. I always say I’ll stop procrastinating… tomorrow. So I admit, I did sit on these golf clubs for several weeks. Okay, okay… almost two months.

But I did look up their value, and found that not only did we have some very nice, expensive clubs on our hands, we had two prototypes that are super rare and tend to fetch a pretty penny! I decided that whatever we made would go into our honeymoon fund.

We agreed that we we would just list them all together on Craigslist, minus the two prototypes, which I would sell separately. 13 clubs for $500 or best offer, and the prototypes for $100 each. This way it’s less of a hassle. I got to thinking, however, and wondered if eBay would be the better avenue for these, since it reaches a wider audience.

I started off by listing the nicer of the two prototypes on eBay, just to test the waters. I didn’t even put many details, just some good photos. I set an auction start price at $99.00, worrying that it would be too high for a starting bid price, but when I saw a bid come through within the first half hour of it going live, I was ecstatic. 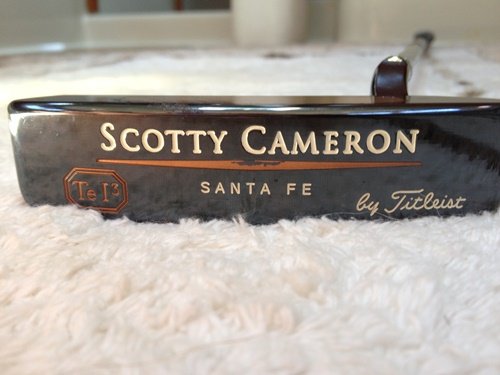 That putter, a rare Scotty Cameron 1998 Xperimental Prototype, ended up fetching $275! At that moment, I knew that I’d be selling the rest of them on eBay, one by one.

The second one I listed brought in $157 and the third one, $66! A fourth one sold for $200, but I ended up having to refund the money because I measured it wrong, but I’ve since relisted it, and it’s getting bids.  And I still have 11 more to go after that!

Seriously, why was dude just throwing these out? Is he really so rich that he couldn’t be bothered to at least donate these somewhere? I’m sure he knew someone would pick them up, and he obviously didn’t care, but still. Not that I’m complaining. This will end up covering a huge chunk of our plane fare to Europe!

I just keep trying not to imagine what we could have gotten had we grabbed all of them that day, but hopefully the dude in the car behind us is having the same kind of luck and doing something special with the money to treat himself and his lady.

Ah, who am I kidding? Screw that guy. He got my clubs.

What’s the best thing you’ve ever found that someone was throwing away? Maybe we could start a dumpster diving for profit series on here!