A few years ago when we decided to move onto a sailboat and travel, we put our house up for sale. Knowing that the real estate market was still struggling to crawl it’s way back out of the hole created by the crash of 2008, we understood it might be on the market for awhile, but we had hopes that we’d sell sooner than later because we had a great corner lot in an up-and-coming neighborhood where beautiful new homes were being built, raising the property values throughout the neighborhood. We were also just minutes away from downtown Nashville and Vanderbilt University, so the location couldn’t be beat.

Well, our high hopes slowly started to dwindle because although we got a lot of showings, we went almost a year without a single offer. Not even an insulting one. We got discouraged, thinking we’d never sell the house and get our boat, until one day, the heavens opened up and the angels threw me a bone… in the form of a pizza receipt.

But first let me back up a little.

My guy was out of town on business, so I had asked my best friend Laura, who lives in Atlanta, if she wanted to come up for a weekend visit. She promptly agreed and drove up, where we commenced to baking cookies, painting our toenails, spreading out our crap everywhere, and basically having an adult slumber party.

Saturday morning, as luck would have it, I get a call from our real estate agent asking if she can show the house that afternoon. WHAT?

I was tempted to tell the agent it was not a good time, as I had a guest in town, but Laura, being the awesome friend she is, offered to help me get the house in ship shape for the showing. We then went to grab lunch at a nearby Mexican joint while the house was being shown. After some time had passed, we returned and as we walked in the door, Laura reached down to pick something off the floor.

“Here – I think you dropped this”, she said.

Laura and I immediately looked at each other with the same evil twinkle in our eyes and said at the same time, “Let’s stalk her!”

Now, by stalking, I don’t mean the get-you-served-with-a-restraining-order kind. In fact, we had previously coined a term for what we were about to do, and it’s called stearning. You see, stearning is when you stalk someone in order to learn more about them, but without malicious intent. Get it? Stalking + Learning = Stearning.

In fact, to go even further back for a minute, Laura and I became best friends because I had stearned her on Myspace (remember those days?) after having sneaking suspicions that the guy I was seeing was also seeing her. After a witty email exchange back and forth with her to compare notes, the suspicions were confirmed so we both ditched the guy and became fast friends. 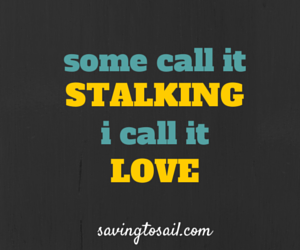 Now back to the pizza receipt. We sat at the dining room table, promptly opened my laptop and Googled the name on the receipt, followed by “Gary, Indiana”. One of the first results was this girl’s Facebook page, which we clicked on. Of course, since I wasn’t her friend, I wasn’t able to see much because her profile was set to private, but her profile pic showed a cute girl who looked to be in her mid-twenties. I clicked on her “photos” tab, and saw that she had been tagged in some wedding photos. HER wedding. Awww… she was a newlywed! How sweet. They must be relocating to Nashville.

Laura and I then began profiling her (we should have been detectives), establishing her personality based on a few photos and very little other information on Facebook. She wore little (if any) makeup, and was very naturally pretty. She also dressed fashionably, without being too trendy, yet made it look effortless. Basically she was the sort of girl we all secretly envy.

Bingo! We opened up her page, and one of the first boards we see was called DREAM HOUSE. I click on the board and a quick glance at her pins nearly rendered us speechless (not an easy feat) until Laura matter-of-factly said, “Dude – they’re going to buy your house.”

You see, her Pinterest pins revealed a style that was so similar to our house that it wasn’t even funny. Her dream kitchen? An open design with soft blue-grey walls and shelves in lieu of cabinets. A rustic looking wood table sat in the middle of the room. Very minimal, very clean. As Laura looked around our kitchen, she pointed out the similarities to the girl’s Pinterest photos. Our kitchen had slate-blue walls, with open shelves, and we were sitting at a table that my honey had handcrafted from reclaimed wood.

That’s when we came up with a plan. Since we have extensive experience in the field of female psychology, and based on the findings via our Pinterest stalking session, Laura and I knew that this girl likely loved the house. How could she not, with the similarities in our decor and design tastes, along with the beautiful landscaping, complete with a lovely dogwood tree and a gorgeous Japanese maple? We just knew that we would either receive an offer from them, or a request for a second showing.

Laura returned home to Atlanta the following day and sure enough, about a week later, I got a call from our real estate agent requesting an appointment for a second showing.  I casually asked if it was the same people who had been there the weekend prior and she said yes.

I called Laura and excitedly told her that our predictions had been right, and we agreed that my job was now to “casually” stage the house to look exactly like her Pinterest pins. You know, do it in such a way that it’s not blatantly obvious. but also not too subtle… kind of like when you wear just enough makeup to make it look like you’re not wearing makeup. 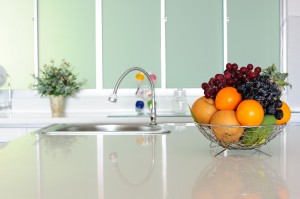 ed her Pinterest page again and saw that in her dream kitchen photos, there was a white bowl of oranges sitting in the middle of the wooden table. What did I do? You’re damn right I put a white bowl of oranges on our table! One of her pins showed a bedroom that had a vase of flowers along with some perfectly stacked books on the nightstand, so our nightstand now had a vase of fresh tulips, and some books stacked just so. A few details here and there, and I was ready. I told a friend of mine who is a real estate agent about what I had done and he just shook his head saying, “Oh, you are so bad. And you are an absolute genius.”

It was genius. In fact, it was so genius that in less than 24 hours, they made an offer, and three weeks later, the fresh, young new bride from Gary, Indiana with a knack for style and an eye for sensible minimalism became the proud owner of her Pinterest dream home.